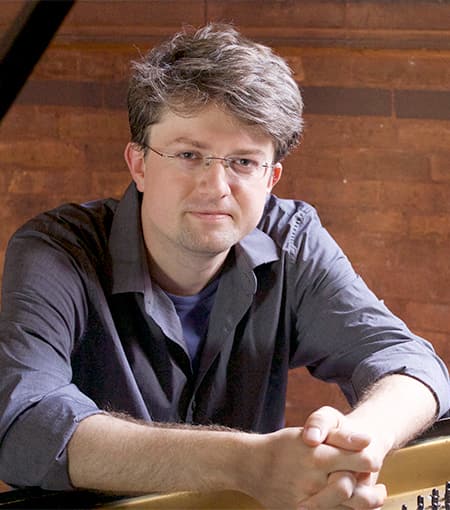 Born in Boston and raised behind the “Redwood Curtain” of northern California, pianist Ryan MacEvoy McCullough has developed a diverse career as soloist, vocal and instrumental collaborator, composer, recording artist, and pedagogue. Ryan’s music-making encompasses work with historical keyboards, electro-acoustic tools and instruments, and close collaborations with some of today’s foremost composers. His longstanding collaborative (and life) partnership with soprano Lucy Fitz Gibbon has yielded a substantial crop of new art song repertoire, as well as his work in contemporary ensemble and commissioning project HereNowHear, 2017 recipient of a Fromm Foundation award.

Ryan has been featured as concerto soloist with major orchestras including the Los Angeles Philharmonic and Toronto Symphony, and has appeared at major festivals and concert halls around the world. He holds his Bachelor of Music from Humboldt State University (studying with Deborah Clasquin), Artist Diplomas from the Colburn Conservatory and the Glenn Gould School at the Royal Conservatory in Toronto (John Perry and David Louie), a Masters in Music from University of Southern California (John Perry), and Master of Fine Arts and Doctor of Musical Arts from Cornell University (Xak Bjerken). He currently lives in Kingston, NY, and is a collaborative piano fellow in the Bard College-Conservatory of Music, and visiting lecturer at Cornell University.