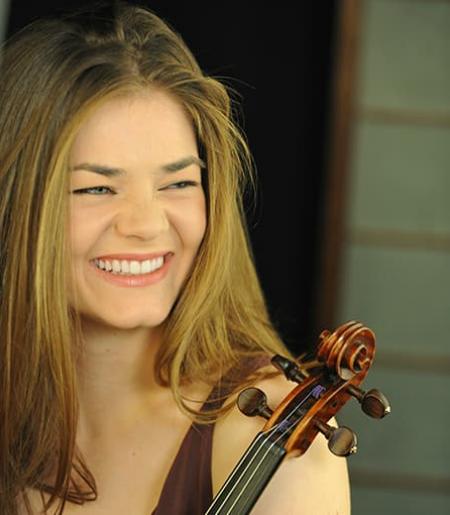 Violinist Rebecca Anderson has appeared worldwide as a recitalist and chamber musician. Known for her “incisive musicality” (The Oregonian), recent appearances include chamber music performances at Carnegie Hall, the alumni Continuum series at Kneisel Hall Chamber Music Festival, and tours across Europe, Asia, and South America.

Ms. Anderson’s passion for chamber music has led to festival appearances with Music@Menlo, Chamber Music Northwest, the Savannah Music Festival, Music From Angel Fire, and Verbier Festival. Performance highlights include collaborations with Ani and Ida Kavafian, Itzhak Perlman, Andre Watts, David Shifrin, Ben Folds, and Questlove. She has performed on concerts presented by the Chamber Music Society of Lincoln Center and the Philadelphia Chamber Music Society, and has performed at Carnegie Hall, the Kennedy Center, Baryshnikov Arts Center, and Library of Congress.

Solo appearances have taken Ms. Anderson across the country with the Philadelphia Orchestra, Oregon Symphony, Olympia Symphony, and Columbia Symphony orchestras. As a recitalist, she has toured internationally, with recent concerts in New York, California, Oregon, and Texas. Ms. Anderson was a first prize winner at the 2013 American String Teachers Association National Solo Competition. Other awards include the bronze medal and Bach Award at the Stulberg International String Competition, as well as the youngARTS Gold Award, which led to being named a Presidential Scholar in both the Arts and Academics.

A frequent guest with conductorless chamber orchestras, Ms. Anderson has toured with Orpheus Chamber Orchestra and has served as Guest Concertmaster with A Far Cry and the Knights. She has performed as Guest Principal Second Violin with the National Arts Centre Orchestra in Ottawa, and is concertmaster of the New Orchestra of Washington in Washington, D.C.

An arts advocate and educator, Ms. Anderson spent two formative years with Ensemble Connect, a fellowship based at Carnegie Hall that combines artistic excellence with a focus on the social and community impact of the arts. She was also one of twenty individuals selected to take part in the 2010 Americans for the Arts National Arts Policy Roundtable hosted by the Sundance Institute.

In 2018, Ms. Anderson co-founded VOTESart, a non-partisan organization that uses music to promote voter information and creative civic engagement across the country. Ms. Anderson co-founded the Anderson-Sasaki duo in 2019, creating residencies that strengthen community through varied interactive performances and presented recitals. The Anderson-Sasaki duo has recently commissioned composer Emily Cooley for a new work to be premiered in the 2021-22 season.

Ms. Anderson is currently the Interim Director of the Violin Program and Visiting Lecturer at Cornell University, and was previously Visiting Artist at the Crane School of Music, SUNY Potsdam. Additionally, she assists in teaching the studio of Ronald Copes at the Juilliard School. She was Lead Faculty for the Summer Performing Arts with Juilliard program in Switzerland in 2018, and has served for several years as a faculty member for the Bennington Chamber Music Conference. Ms. Anderson worked as a partner teacher for two years with the public school students at Brooklyn High School of the Arts, and has led workshops with students at Skidmore, Connecticut, and Wheaton Colleges, as well as the University of Oklahoma.

Originally from Portland, Oregon, Ms. Anderson is an alumna of the Curtis Institute of Music, the Juilliard School, the Royal Conservatory of Music, and Ensemble Connect (formerly Ensemble ACJW).