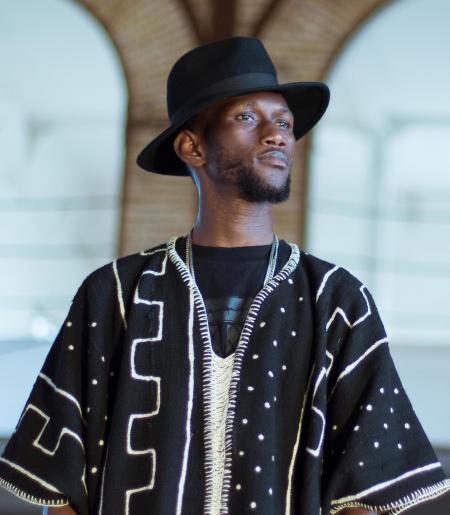 Hip hop artist Moustapha Fall performs under the moniker ResKp (from the French rescapé, meaning survivor). A prominent rapper in Dakar, Senegal, he launched his national career in 2003, when he was named Best New Artist in the Senegalese Hip Hop Awards, followed by a spate of recognition in televised competitions and awards ceremonies. He has appeared in major festivals including the 2010 World Festival of Black Arts in Dakar and the Saint Louis Jazz Festival.

ResKp has released two solo albums, Dafa Jot [It’s Time] in 2009, and Sarax [Offering] in 2017. These musical commentaries on the complex struggles of daily life in his country combine local instrumentation and vocals with contemporary hip hop beats and socially conscious lyrics in French and his mother tongue, Wolof.

In the United States, ResKp has embraced the opportunity to connect with students and audiences through the global musical medium of hip hop. Through performances, artist talks, and workshops in universities around the country, he draws on his talents and experiences to forge intercultural connections and correct negative representations of African people and cultures that saturate Western media.