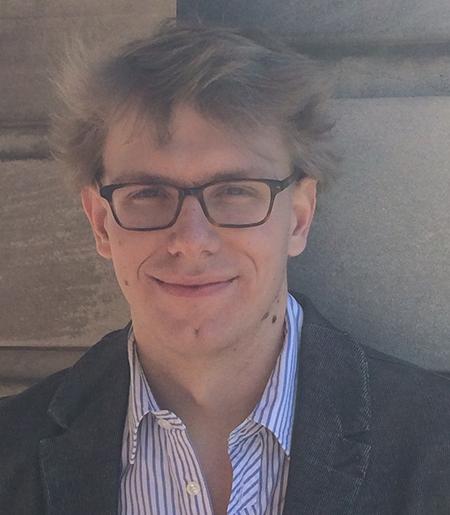 My dissertation, “Life and Death for Music: A Polish Generation’s Journey across War and Reconstruction, 1926–53,” is a cultural history of the Second World War as seen through the eyes of the Polish and Polish-Jewish musicians who were uprooted by it. I ask how the politics of friendships—the shifting relationships and alliances among the leaders of this musical community—can help reveal the long-range impacts of trauma on post-conflict musical cultures. Committed to broad-based interdisciplinary inquiry, my work is in dialogue with intellectual history, music analysis, Eastern European studies, and Holocaust and genocide studies. Research for this project has taken me to over a dozen archives in five countries, work supported by the Einaudi Center for European Studies, the Society for the Humanities at Cornell, and by a Beinecke Fellowship.

I have presented findings for audiences in Poland, the UK, and in the US, including at annual meetings of the American Musicological Society and at the annual convention of the Association for Slavic, East European, and Eurasian Studies. In the 2018–19 academic year, I am a Visiting Fellow at the Jack, Joseph and Morton Mandel Center for Advanced Holocaust Studies at the United States Holocaust Memorial Museum in Washington D.C. and a Research Fellow at the Polin Museum for the History of Polish Jews in Warsaw.

My research has also led to collaborations with international scholarly communities and performers to help remedy the still-pronounced neglect that many of my research subjects suffer. A highlight of this work was the scholarship and performance festival “Forbidden Songs” in spring 2018, which featured six US premieres of works by Roman Palester and the (re)premiere of Poland’s first postwar feature film, Zakazane piosenki, with new English subtitles.

In addition, my abiding interest in how music maps social change has led to research in fields including the history of technology, improvisation studies, and sound studies. I have written about how changing conceptions of amateurism provided a sounding board for Chopin (“Ersatz Improvisation: Chopin’s Opus 28 and the Published Prelude Collection,” in Piano Culture in 19th-Century Paris, 2015) and about how the advent of print capitalism restructured notions of improvisational creativity (“Writing at the Speed of Sound: Music Stenography and Recording Beyond the Phonograph,” 19th-Century Music 41 [2017], 121–150.) Extending these interests into the present-day, I have designed and taught a course that treats improvisation as a window into contested notions of multiculturalism in recent U.S. history as a Randel Teaching Fellow in the Cornell Department of Music (Improvisation and Social Change in the U.S.). Building on my research for this course, I am currently working on a teaching and research project that situates DJ-led improvisation as a scene for global encounters.

Before arriving at Cornell, I studied at the Center for Polish Language and Culture at the Jagiellonian University in Kraków on a fellowship from the Kosciuszko Foundation and the Polish Ministry of Education. I hold a B.A. with Highest Honors from Swarthmore College and studied cello performance at the Jacobs School of Music at Indiana University.