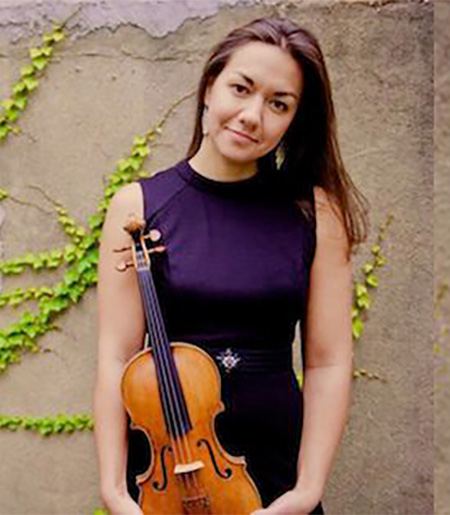 Noted by The New York Times for giving “the proceedings an invaluable central thread of integrity and stylishness” and having “played with soulful flair,” violinist Ariana Kim made her New York recital debut at Carnegie’s Weill Hall in 2008 and is now in her sixth year as a professor at Cornell University.  As the newly appointed violinist of the Aizuri Quartet, she and the ensemble were awarded the gold medal at the 2017 Osaka International Chamber Music Competition.  At 16, Ariana made her debut with the St. Paul Chamber Orchestra and at 24 was appointed acting concertmaster of the Louisiana Philharmonic in New Orleans and has since become one of the most respected artists of her generation.

In September of 2016, Ariana joined the Aizuri Quartet, now based in New York City.  As 2017-18 the MetLiveArts String-Quartet-in-Residence at the Metropolitan Musem of Art, the Aizuri Quartet will present five originally curated performances featuring new commissions, collaborations with world renowned artists, and programs centered on current global and social topics at the MET.  Recent highlights for the Aizuris have included a debut recital at the Kennedy Center, performances at the University of Toronto and on the Chamber Music Society of Bethlehem series.  Their dedication to educaiton and outreach have brought about residencies at Cornell University, with the IRIS Chamber Orchestra, as well as teaching and performing together at the Crowden Music Center Summer Chamber Music Institute in Berkeley.

She now marks her 11th season with The Knights, a New York-based imaginative and diverse musical collective that performs programs ranging from string quartets to bluegrass tunes and Mid-East folk music, to the great chamber orchestra masterpieces of the 20th century.  In 2015, the group released its seventh album, "…the ground beneath our feet" – a collection of live performances from a recent U.S. tour – for Warner Classics, on which Ariana is a featured soloist in Steve Reich’s Duo for two violins and strings, alongside Guillaume Pirard; that track has since received much acclaim and was chosen as one of NPR’s “Songs We Love” for 2015.  Their latest album, "Azul" features the world premiere recording of Osvaldo Golijov's work for cello and orchestra with distinguished guest artist Yo-Yo Ma, alongside new works by Sufjan Stevens (arr. Michael Atkinson), Karleinz Stockhausen (arr. Caroline Shaw).

Ariana finds another musical home in her native Minnesota as she is now in her 11th season with the Chamber Music Society of Minnesota, where recent collaborations have included performances with pianist Leon Fleisher, violinist Robert Mann, cellists Fred Sherry and Peter Wiley, clarinetist Charles Neidich, and jazz pianist Kenny Werner.  Upcoming projects include a 25th anniversary season commission for chamber ensemble and childrens' chorus in honor of the late Stanislaw Skrowaczewski and collaborations with Nobuko Imai and Anthony McGill.

An avid chamber musician of both the contemporary and traditional literature, Ariana was a member of the New Yorker-acclaimed New York new music ensemble, Ne(x)tworks for 10 seasons, with whom she improvised, performed, composed, and recorded.  Their debut CD featuring the chamber music of Earle Brown on Mode Records was then followed by two self-release albums that chronicled their residencies at The Stone in downtown Manhattan.  In 2013, they made their international debut to a packed house with the Maulwerker Company at the John Cage Festival in Berlin.

Ariana has spent summers at Ravinia’s Steans Institute, Yellow Barn, and Orford Centre d’Arts.  A passionate pedagogue, Ariana spends much of the academic year teaching and mentoring a full studio of talented collegiate students at Cornell; this summer, she will join the faculty of the Palo Alto Chamber Music Workshop for the 17th consecutive year, the Northern Lights Chamber Music Institute for the 11th time, and the Crowden Music Center Chamber Music Institute for the fourth time. She volunteers annually with two Title One schools in San Jose, CA and has presented master classes throughout the U.S. and abroad at such institutions as Kent State University, The MacPhail Center, and the Massachusetts Institute of Technology.

Raised the Twin Cities of Minneapolis-St. Paul, Ariana is the daughter of two violinist parents who served as her private teachers until she left for college.  After graduating from high school, she traveled west to attend the San Francisco Conservatory where she studied chamber music with Bonnie Hampton and Nathan Schwartz, and violin with Ian Swenson and Camilla Wicks.  She then went on to receive her masters degree and doctorate from the Juilliard School under the tutelage of Robert Mann.

A recipient of an Affinito-Stewart Grant and a Society for the Humanities Grant, Ariana released her first solo album in December of 2015 which features works for solo violin and violin + 1 written by American women composers including Ruth Crawford Seeger, Augusta Read Thomas, and Jennifer Curtis.  From January through July of 2016, Ariana lived and worked in Brescia, Italy where her work centered on a project involving music, art and design to bring cultural awareness and integration to a group of newly settled refugees form Northern Africa.  Other engagements during her sabbatical included presentations at Il Museo del Violino and Periscope for Arts, performances with Milano Classical in Milan, and two solo recital tours featuring the music of Bach, Augusta Read Thomas, and Paganini in Siena.