Those were among the impressions several Cornell faculty and students have from a week spent with jazz musician and educator Wynton Marsalis, on campus March 22-28 for his first extended visit as an Andrew Dickson White Professor-at-Large.

“He focuses on the intention that we put behind the music, sensing whether or not we are engaging with its deeper meaning,” said Tom Nyul ’19, a biology and society major and tenor saxophonist in the Cornell Jazz Band. “He laughed and smiled and made it easy to approach and engage him.”

The visit was capped by a collaborative concert with the Cornell Jazz Band and Wind Symphony March 28 in Bailey Hall, featuring the Cornell Symphony Orchestra on a new arrangement of Marsalis’s “Blues Symphony.”

“It was incredibly gratifying just to share the space with him and collaborate on several different pieces, of different styles,” said James Spinazzola, director of wind ensembles. “From my perspective, one of the most rewarding aspects was performing new arrangements and hearing not only his take on them but how he chose to play over them, to improvise to them.”

All week long, Marsalis sat in on rehearsals and visited classes, interacted with the community, lectured and answered questions.

“He was able to shift almost immediately from discussions of jazz in Cold War-era soft diplomacy, to jazz education, to legacies of minstrelsy in society, to his compositional process, without breaking stride,” said Steven Pond, associate professor and chair of music.

During rehearsals, “he was clearly approaching the process as a collaborator and educator, not simply as a soloist,” Spinazzola said. “He immediately developed a rapport with the ensemble that served us throughout the week. Our students are brilliant and engaged, and he was hip to that from the outset. He spoke eloquently about communication, sensitivity, scholarship, and critical evaluation; and in doing so not only made great music, but also leveraged music to nonmusical goals. He tailored and shaped the experience to serve those goals.”

“There’s a certain level of education and intensity here,” Marsalis said. “The kids were so respectful, and amenable to being taught when the Cornell kids showed up to teach them.”

Marsalis said he enjoys working with young people at all kinds of schools.

Cornell University
Famed jazz musician and Cornell A.D. White Professor-at-Large Wynton Marsalis on his approach to teaching.
“If I go to an elementary school, I just talk to them in a very natural way, and give them the benefit of whatever skill we have,” he said. “Music is a valuable subject because it relates to the fundamentals of life, and along with music, I like to talk about civics and democracy and participation.”

Engineering student Vineeta Muthuraj ’19, a percussionist and pianist in the Wind Symphony, said Marsalis in rehearsal “was warm, engaging and entertaining … he encouraged us to understand the soul of the music and bring it out.”

During all their rehearsals together, “he was really trying to get us to communicate with each other in the moment,” Muthuraj said. “Jazz really emphasizes conversation between musicians, more so than traditional wind ensemble repertoire, where we’re supposed to follow the conductor.”

For Paul Merrill, the Gussman Director of Jazz Ensembles, a highlight of the visit was Marsalis’s critique at his final rehearsal with the Jazz Band.

“We performed a set of mostly Ellington a few days before in Barnes Hall and Marsalis was in attendance,” Merrill said.

“He took detailed and informative notes and spent close to 30 minutes sharing observations from the band’s performance, calling out specific musicians who deserved praise and/or criticism. Marsalis was both intense and jocular while his tone was direct and honest. Watching the faces of my students at that moment, hearing their discourse immediately after the critique, and imagining how this conversation will continue is, for me, a testament to his impact on our entire community.”

At the concert in Bailey Hall, Pond was struck by a moment during Duke Ellington’s “Concerto for Cootie.”

“Wynton traded lines with the Jazz Band’s trumpeters – all five of them – in the process, demonstrating to them and the audience that Cootie Williams’s growling wah-wah could tap a deep well of life experience,” he said. “The students clearly got the lesson, as they progressively came out of their shells. By the end of the song, I believed them as much as I believed Wynton.”

In Spinazzola’s Western Music Theory course on the day of the concert, Marsalis gave his thoughts on time, and the rhythm section’s role.

“It sounded like he was telling us to take a step back and feel the time – in daily life and in music – instead of fighting it,” Muthuraj said. “I know that Professor Marsalis’s advice helped us because the concert performance had incredible vitality. It has been a while since I felt so exhilarated during a performance. I didn’t want it to end because we were all having so much fun.” 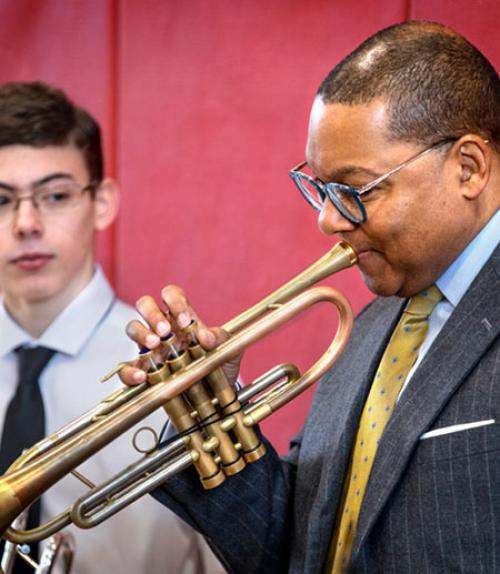 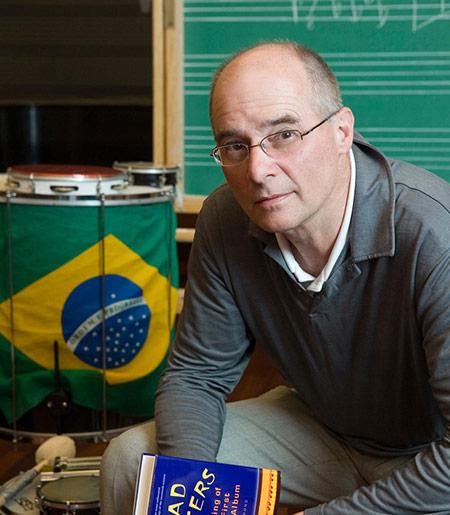 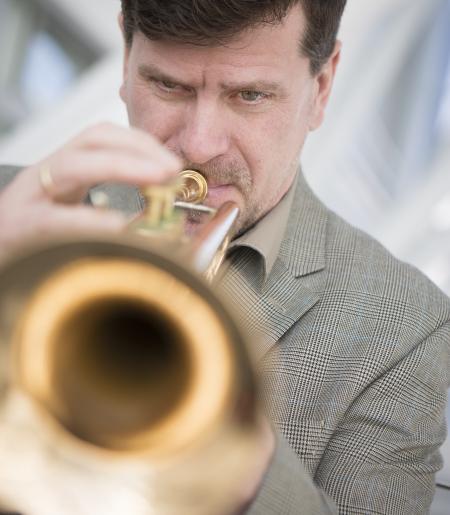