Internationally acclaimed musician, composer, and bandleader Wynton Marsalis will play in concert with student musicians at Cornell’s Bailey Hall on Wednesday, March 28 at 8:00 p.m. The concert is free and open to the public with no tickets required. Seating is first-come, first-served.

Marsalis is best-known as a premiere jazz trumpeter, but his varied career has also included classical music and composition, introducing jazz elements into orchestral music and expanding the repertoire for both styles. As a Cornell A.D. White Professor-at-Large, Marsalis will showcase his skills as an educator, composer, and performer, as he mentors student musicians at Cornell. The concert will feature his newly revised orchestral composition, Blues Symphony, played by the Cornell Symphony Orchestra, a piece which infuses blues and ragtime rhythms into classical orchestrations, creating a genre-bending piece that introduces classical and jazz fans to new musical elements. Orchestra director Chris Younghoon Kim says the piece is an opportunity for the “students to extend their musical experience to areas they might not have otherwise encountered.”

The second half of the concert program features the Jazz Band, under the direction of Paul Merrill, and the Wind Symphony, conducted by James Spinazzola. Marsalis will perform with both ensembles, and selections include some of his arrangements of jazz greats, including Bernstein, Ellington, and Coltrane.

In addition to the March 28 concert, the Cornell Jazz Band and the Original Cornell Syncopators, an ensemble dedicated to historic jazz performance, will give a concert on Sunday, March 25 at 8:00 p.m. in Barnes Hall, after coaching sessions with Marsalis. The concert repertoire includes music from the jazz bands of the 1930s, from Duke Ellington to Count Basie to Chick Webb.

Merrill says his students have been preparing for Marsalis’ visit since last year and are “excited about sharing our work, love, and respect of this great art form with such a dynamic performer, advocate, and leader.” Merrill adds, “This experience will be transformative for not only the students involved but for the music department and the jazz program. Jazz has always meant community to me. The very fabric of the music is woven around a central premise: we negotiate by listening, finding a voice, and expressing our sentiment - all in a kaleidoscope of musical textures.”

The multi-faceted Marsalis will also participate in numerous other classes to enrich campus life and will bring his educational skills to middle and high-school musicians in the Ithaca community.

Born into a prominent jazz family, Marsalis has continued the legacy of great jazz musicians from New Orleans, and his career has brought important visibility to jazz as artform and cultural expression. Among his numerous awards, Marsalis became the first jazz musician to win the Pulitzer Prize for Music for his oratorio, Blood on the Fields. He is a nine-time Grammy Award-winner, and has received both the National Medal of Arts in 2005 and the National Humanities Medal in 2015.

Under Marsalis’ leadership, Jazz at Lincoln Center has become one of the world’s most acclaimed performance spaces, a center for advocacy, and educational programs in jazz.

Both concerts are free and open to the public. No tickets required, and seating is first-come, first-served. 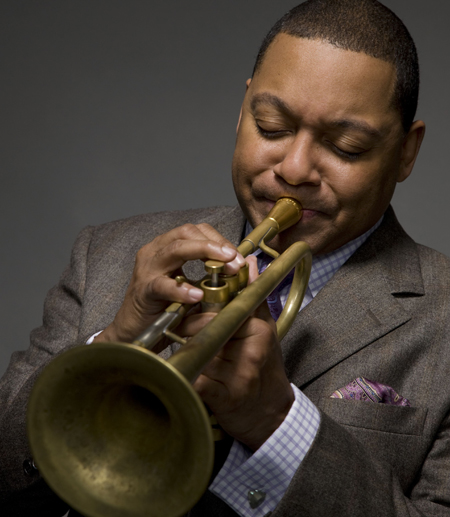