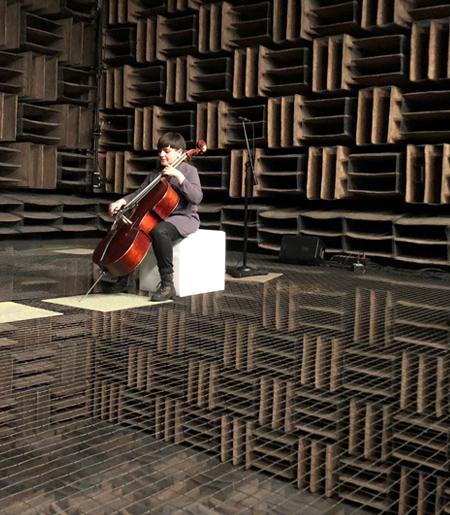 Providence-based cellist and electronic musician Laura Cetilia is a performer, composer, educator, and presenter. As a daughter of mixed heritage (second generation Mexican-American), she is at home with in-betweeness, moving with ease through genres and practices as she did with cultures and languages growing up on the Eastside of Los Angeles. As a composer, her music has been described as “unorthodox loveliness” by the Boston Globe and and her solo album, “Used, Broken, and Unwanted” was hailed as “alternately penetrating and atmospheric” in Sequenza 21. Her works have been played by ensembles such as Mivos Quartet, Splinter Reeds, Dog Star Orchestra, a.pe.ri.od.ic, Verdant Vibes, LCollective, The Furies, and violinist Erik Carlson. The Grove Dictionary of American Music describes her electroacoustic duo Mem1 as a “complex cybernetic entity” that “understands its music as a feedback loop between the past and present.” Mem1 has held artist residencies and toured extensively throughout the U.S. and Europe. In the performer/composer collective Ordinary Affects she has collaborated with, commissioned and premiered works by esteemed composers such as Alvin Lucier, Christian Wolff, Michael Pisaro, Jürg Frey, Eva-Maria Houben, and Magnus Granberg. After a decade of service as a teaching and performing artist at the nationally acclaimed non-profit Community MusicWorks, she returned to school in 2018 for her MA in experimental music composition at Wesleyan University and will begin her DMA. in composition at Cornell in Fall 2020. She is also a proud mother of one.