Given Foundation Professor Emeritus of Musicology 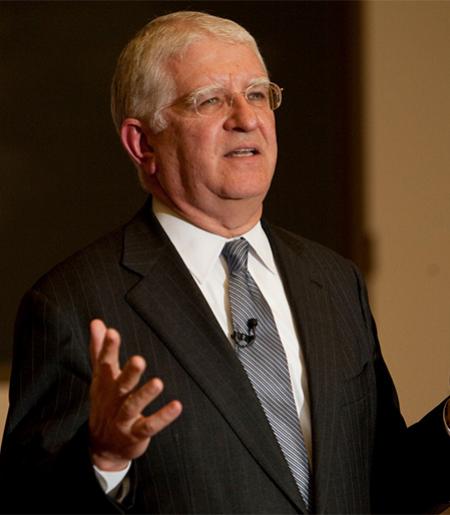 Don Randel, Emeritus Professor of Musicology, received a Bachelor’s degree (1962), a Master of Fine Arts degree (1964), and a Ph.D. degree (1967) from Princeton University. He was a member of the faculty of the Department of Fine Arts at Syracuse University prior to coming to Cornell in 1968. Randel held the Given Foundation Professorship of Musicology at Cornell; his specialty was the music of the Middle Ages.  However, Randel’s research interests were quite broad, including Mozarabic chant and music and culture of the Renaissance, as well as other subjects closely and distantly related (Arabic music theory, Panamanian music, salsa, jazz avant-gardism).  His musical range is no more succinctly on display than in his editorship of encyclopedias, including the Harvard Dictionary of Music (1986; 4th ed., 2003), Harvard Biographical Dictionary of Music (1996), and the Harvard Concise Dictionary of Music and Musicians (1999), a trio of works that have become standard references in the field.   In 1991, while chairman of the Department of Music, he accepted the position of Harold Tanner Dean of the College of Arts and Sciences.

Throughout his 31 years at Cornell, Randel was an active participant on numerous university boards and committees. He chaired a task force on undergraduate education and was involved in Cornell’s strategic planning. He also served on the committee on the curriculum and undergraduate education for the College of Arts and Sciences, on the Cornell Society for the Humanities, and on the University Appeals Board.

In 1995, upon assuming the position of provost, he said “my principal aim [as provost] is to ensure that academic and educational principles guide the methods by which we build the budget and not the reverse.” While he was provost, Cornell began to implement the recommendations of a task force on the Division of Biological Sciences, which was commissioned to plan the future of biological sciences at Cornell and to help strengthen the program. He also helped to develop the Cornell Research Scholars Program in 1996, to recruit the best and brightest undergraduate students by offering special research opportunities and financial support.

In 2000 Randel left Cornell to serve as the twelfth president of the University of Chicago. In July 2005, he announced that he had accepted an appointment to the presidency of the Andrew W. Mellon Foundation and would be leaving the University of Chicago in 2006. The Mellon Foundation is a philanthropic organization dedicated to furthering the arts and humanities. The foundation focuses on five specific areas: higher education and scholarship, libraries and scholarly communications, conservation and the environment, museums and art conservation, and the performing arts.  In 2012, Randel announced his retirement from the Mellon Foundation.