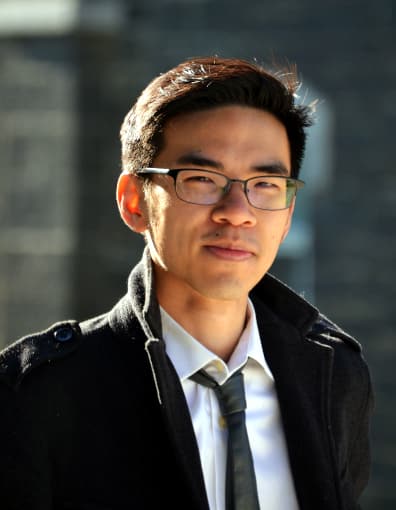 Pianist Andrew Zhou has been noted for his “great sensitivity” and "luminous technique” (Anaclase), as well as performances of “extraordinary energy” (ResMusica). Second-prize laureate of the Concours International de Piano d’Orléans, Mr. Zhou has toured throughout France and has appeared in major venues such as the KKL (Lucerne Festival), Metropolitan Museum of Art (New York), Tongyeong Concert Hall, and the Théâtre des Bouffes du Nord (Paris). He has worked closely with leading composers of our time, including Unsuk Chin, Jacques Lenot, Tristan Murail, Matthias Pintscher, Christian Wolff, and Walter Zimmermann, and has, in addition, been the dedicatee and first performer of works of countless composers of a younger generation. Mr. Zhou is the recent recipient of a commissioning grant from the Arts Council of Ireland for a half-concert length work from composer Peter Fahey. As half of HereNowHear, a piano(+electronics) duo with Ryan McCullough, he has created commissioning projects centered on Stockhausen’s Mantra, receiving works from Christopher Stark, Loren Loiacono, and John Liberatore, with support from the Fromm Foundation. He has been the pianist of the Aspen Contemporary Ensemble and ULYSSES Ensemble. Currently, he is on the Diversity Steering Committee for the Lucerne Festival Academy, of which he is an alumnus.

Mr. Zhou received his doctorate from Cornell University, where he was awarded a Donald J. Grout Memorial Prize for exceptional doctoral dissertations. He studied primarily with Thomas Schultz, Bruce Brubaker, and Xak Bjerken, alongside influential work with Pierre-Laurent Aimard and Tamara Stefanovich. His recordings include a solo disc (“Vienne et après,” featuring premiere recordings of works by Pintscher and Olga Neuwirth), a new two-piano recording that serves as the final installment of the historic CP2 label started by Paul Zukofsky, as well as contributions on the Aeon, Open Space, and New Focus labels. For updates on new projects and links to his writings on music, visit andrew-zhou.com.