Patrick Braga ’17 spent a little more than a year working on his chamber opera, “La Tricotea (Opus 25),” which will premiere Dec. 3 with 16 student vocalists and instrumentalists.

“This was a project out of my own passion for composition and to convince people that opera doesn’t have to be a boring ordeal,” said Braga, who was inspired by a music history course with Professor Judith Peraino and a Glee Club selection by Assistant Professor Robert Isaacs.

“I had been learning about Baroque opera in my music history course and became absolutely fascinated with how interesting and thought-provoking opera could be, beyond the 19th-century tradition of sitting in the dark for three hours and trying not to fall asleep,” Braga said. Joining this with his Glee Club experience singing the Spanish drinking song, “La Trocotea,” “I conjured a story of a Florentine ne’er-do-well who accidentally comes into power in Abyssinia, or Ethiopia” Braga said.

Braga said creating the 342-page opera was an incredible challenge, especially crafting the libretto, the script that is sung throughout.

“For my next opera, tentatively titled ‘Eyes That Do Not See,’ I’m writing a libretto first. Then I can just treat each scene as an independent piece of music and have an automatic kind of checklist to know how far along I am,” he said.

Braga is in his fourth year at Cornell, pursuing dual degrees in music and urban and regional studies. He is the president of Contrapunkt, the organization for undergraduate composers at Cornell, and is a tenor in the Glee Club. His music has been performed in Los Angeles, Monterey, Ithaca and Sarasota, and he has also performed with the Handel and Haydn Society, Cornell Middle Eastern and Mediterranean Ensemble, Cornell Chorale and Harvard Summer Chorus and in Cornell’s Risley Hall performance of Handel’s Messiah.

The opera will be performed at 8 p.m. in Barnes Hall and is free and open to the public.

Kathy Hovis is a writer for the College of Arts and Sciences.

This article originally appeared in The Cornell Chronicle. 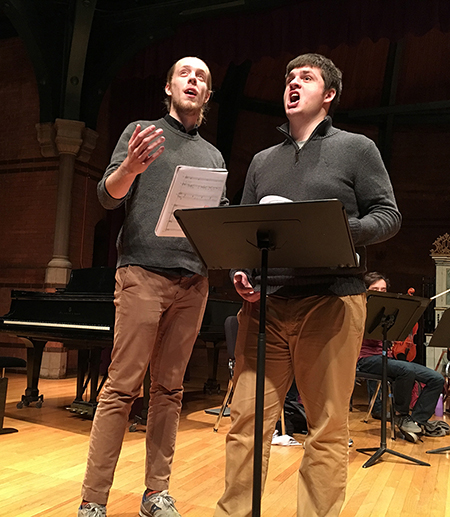