Founded in 1997 by Steven Stucky and a group of performers from Cornell University and Ithaca College who shared a passionate commitment to new music, Ensemble X celebrates its 20th anniversary season with a quartet of concert performances, the first of which will be Sunday, September 24, at 3:00 PM at Barnes Hall Auditorium.

The ensemble's mission is to perform both very new music of the classical tradition – typically music written within the past twenty years – and established works from earlier in the twentieth century. Under the artistic direction of Xak Bjerken, many of the original members of the ensemble still perform with the group, and now a new generation of performers in Ithaca add to the level of excitement about new music in town.

The Italian composer Berio established his reputation in the mid-20th century with musical experimentation and was a pioneer in electronic music. He also explored combining musical forces in a variety of ways, a characteristic that will be on display in this performance. Naturale, for viola, percussion, and recorded voice of a Sicilian folksinger, incorporates Berio’s transcriptions of Sicilian folk songs. Berio often adapted music of others into new compositions, including Folk Songs, which consists of re-workings of traditional folk music as well as Berio’s own original songs. Sequenza XII plays on the different transformations of sound in the bassoon that can create an entirely new and unexpected timbre.

Bjerken describes choosing the repertoire as “like composing a meal,” and he then enjoys the rehearsal and performance process with his fellow musicians, “sharing works that we feel passionate about and having a connection with students and everyone in the audience.” For the 20th anniversary year, Bjerken has taken four different approaches for the four concert dates:

“On the first (September 24), we feature music by Luciano Berio, whose modernist/post-modernist music combines virtuosity with differing approaches to folk transcription. The second (February 25) concert is a tribute to Steve Stucky, featuring a beautiful choral piece by Steve, and music of composers he loved and championed, including Webern, Elizabeth Ogonek, Anna Thorvaldsdottir, and David Lang. On the third concert (March 18), we feature the music of Roman Palester (1907-1989), a Polish composer who is relatively unknown, but deserves much more attention in the States, and this will include U.S. premieres. And the final concert (April 15) is a real blowout: three major works written in the last 20 years for soloist and sinfonietta, conducted by guest Tim Weiss from Oberlin. We include a new piano concerto by Stephen Hartke (a political work called Ship of State), a now classic piece that Ensemble X gave the East coast premiere of, John Adams' Gnarly Buttons, and the amazing surround-sound work by Jonathan Harvey entitled Bird Concerto with Pianosong, in which the sounds of bird song swirl around the audience, controlled by joysticks. All in all, pretty ambitious, I'd say!” 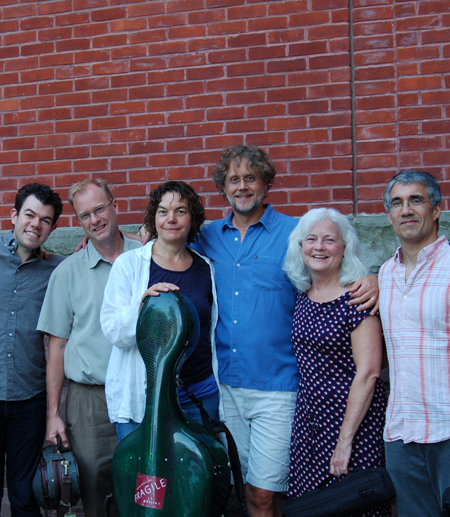