Jerrold Meinwald, the Goldwin Smith Professor of Chemistry Emeritus and a 2014 winner of the National Medal of Science, the nation’s highest honor for achievement in science and engineering, died April 23 in Ithaca. He was 91.

He came to Cornell in 1952, where he trained generations of chemists and produced more than 400 journal articles with some 200 collaborators.

“It’s a sad day,” said Bruce Ganem, the Franz and Elisabeth Roessler Professor of Chemistry and Chemical Biology. “Jerry was one of my closest scientific colleagues at Cornell and was chiefly responsible for recruiting me to Cornell from my postdoc at Stanford [in 1973].”

Meinwald made fundamental discoveries related to how chemicals act as repellants and attractants between organisms. He and the late Thomas Eisner, a friend and colleague for 50 years, were credited with establishing the field of “chemical ecology” – the science that deals with the many ways animals, plants and microorganisms chemically interact.

“The analysis of how chemical signals are produced, disseminated, detected and interpreted to bring about behavioral responses provides deep insight into all biotic interactions,” said Nobel laureate Roald Hoffmann, the Frank H.T. Rhodes Professor of Humane Letters Emeritus and, like Meinwald, a National Medal of Science winner (1983). “Eisner’s and Meinwald’s 50 years of collaborative research opened up this field.”

“Meinwald and Eisner showed that insects and plants, which are the dominant life forms on land, interact in countless ways, both synergistically and antagonistically, through chemical signals,” Ganem said.

Meinwald helped decipher the intricate chemical strategies that insects use for a variety of activities, including mating, locating food, protecting offspring and defending against attackers. Throughout their decades-long scientific partnership, Eisner conducted most of the biological experiments while Meinwald and his research group provided the essential chemical expertise.

Meinwald began his career as a “conventional organic chemist,” he once said, but moved on to do “collaborative chemistry” with Eisner. Meinwald was an advocate for chemists who seek scientific partnerships outside of chemistry – whether in biology, physics or other fields.

Following the announcement of Meinwald’s National Medal of Science award, Dave Collum, chair of Cornell’s Department of Chemistry and Chemical Biology, called Meinwald a “remarkable human being with a soft-spoken, easy-going style” that set him apart from many in the field. “He is a stupendous colleague – a gentleman and a scholar,” Collum said at the time.

He was elected to the National Academy of Sciences in 1969 and to the American Academy of Arts and Sciences in 1970, serving as that organization’s secretary from 2005-16. Meinwald won the 2014 Nakanishi Prize of the Chemical Society of Japan; the 2013 Benjamin Franklin Medal in Chemistry; and the 2008 Grand Prix of la Maison de la Chimie, among many awards and honors.

Meinwald played the flute and the recorder, and he loved to perform. In 1989, he, Eisner (who played piano and harpsichord) and Swedish colleagues performed a concert of 18th-century chamber music at the annual meeting of the International Society of Chemical Ecology in Sweden. And at the 2014 Nakanishi awards ceremony in Nagoya, Japan, Meinwald performed Mozart flute duets with Japanese chemist Eiichi Nakamura.

“Jerry studied the flute with some of the outstanding teachers of the 20th century,” said music professor Annette Richards, “and he routinely took his flute with him to conferences, performing with other scientist-musicians as part of the academic program. When I learned of this practice, soon after meeting him, I thought it an unusually wonderful way to engage in creative collegiality. That was typical of Jerry.”

He appreciated music of all kinds. Said Ganem: “When Jerry came to California to talk me into accepting my Cornell offer, he confided in me over dinner that he had, the night before, also attended a Grateful Dead concert at [the] Fillmore West arena in San Francisco.”

He will be remembered fondly, Hoffmann said. “To everyone, not just his colleagues, Jerry was a sweet man,” he said. “It is impossible to think of him without a smile, and that is how we will remember him.”

Meinwald is survived by his wife of 37 years, Charlotte Greenspan, and three daughters. Funeral services were held April 25 at Temple Beth-El, Ithaca; memorial donations can be made to either National Public Radio or Planned Parenthood.

An obituary was also published in the New York Times. 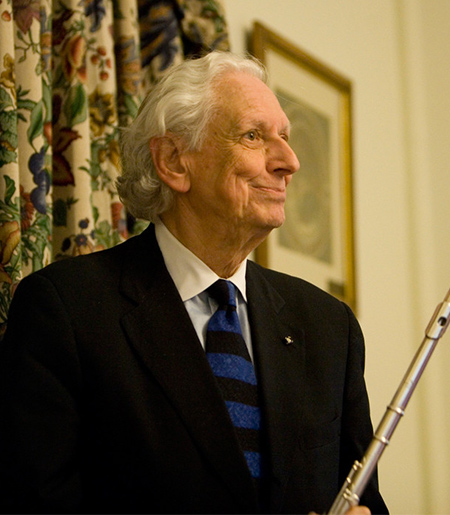