Explaining music's 'chill' effect on the brain and body

“Why is your music important to you? How much time do you spend listening to music per day? How many songs per day do you listen to? How important is your music to you?”

Ron Hoy, Mersamer Professor of Neurobiology and Behavior, quizzed a group of 35 students on those questions and more when they gathered Nov. 11 for a Bethe Ansatz after-dinner conversation, “Building a life worth living.” Hoy offered an interactive lecture in collaboration with music Professor Ariana Kim, who brought her violin to play while they both explained what happens in the brain when people listen to music.

“I really want to do this [presentation] around your music,” Hoy said at the beginning of the talk.

The interactive lecture prompted students to think about why they listened to the music they did.

One student says he searches for music that matches his thoughts while another says she turns on music to match the task she has to complete.

“Music is the language of emotion… it fulfills a strongly felt need,” Hoy said, adding that humans aren’t the only creatures who create music-like sounds in specific social situations: mammals like whales, chimpanzees, porpoises and others produce “songs,” which have also been studied here at Cornell in the Laboratory of Ornithology (CLO). Motifs and melodies have been discovered in whale studies by CLO’s Dr. Katherine Payne.

“What’s your favorite song?” Hoy asked the students. “Does it give you a chill?”

Many students raised their hands and said that some of their favorite ballads gave them chills. Hoy explained that you aren’t faking the chill when you feel it because music really can make you feel certain ways. It can elicit happiness, sadness, anger or fear, as well as leave us unmoved or neutral. These feelings are why music plays an important role in movie soundtracks, for example.

“How many of you consciously listen to the movie soundtrack?” Hoy asked.  “Do you like it? Are you aware that people have worked really hard on that soundtrack?”

Even though we might not realize it, 60-70 percent of our brain may be focused on listening, so we listen closer to the music than we realize during a film, Hoy said. Music moves the film along because it helps us feel different emotions while watching.

During the conversation, Kim played several different songs for the audience on her violin. She varied the same song by changing its key, then asked students what they felt. Tempo, key, and register can impact emotions, she said, with faster tempos in a major key sounding happier, and faster tempos in a minor key possibly eliciting anger.

“You feel the music, and that’s how it reaches you in non-verbally,” Hoy said.

Hans Bethe Ansatz after-dinner conversations are weekly, hour-long informal talks in Professor Scott MacDonald’s apartment. MacDonald is house professor in Bethe House, as well as professor of philosophy and the Norma K. Regan Professor in Christian Studies. He hosts a special guest each Wednesday evening at 7:15 for the lecture, which is also offered to students as a one-credit class. The conversations are dedicated to engaging students with faculty and visitors aimed at broadening horizons and opening minds. For more information about these conversations, visit http://blogs.cornell.edu/betheansatz/about/.

Anna Carmichael is a communications assistant for the College of Arts and Sciences. 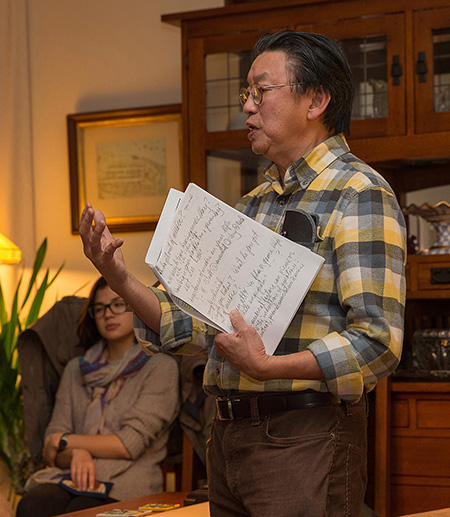