"I have become tenacious in pursuit of my dreams, most of which I didn't even know I had until coming here."

Why did you choose Cornell?
Believe it or not, what really decided it for me was getting lost in the Music library during Cornell Days. I wandered into the stacks and was so distracted by the books I'd found that I lost track of my family. I eventually ran into a friendly grad student who struck up a conversation with me about the books I was browsing. It was just long enough to keep me from panicking until my family could find me again, which they did. Everyone I met was incredibly friendly, and I decided on the spot that I'd found my home for the next four years.

What is your main Cornell extracurricular activity -- why is it important to you?
My main extracurricular activities at Cornell are my ensembles, particularly the orchestra. I played violin in the symphony orchestra for a year and have been in the chamber orchestra for the past two years. It's important to me because the violin is my first instrument, and like a mother tongue, it's the easiest way for me to communicate musical ideas. More often than not, I find that communicating through music is easier than using words. People say what they mean when they play; there's a lot less to hide than in verbal conversation, and it's nice to see the layers between people slowly peel away when we play in an ensemble.

What was your most profound turning point while at Cornell?
My most profound turning point came during fall of 2014. For me, it was by far the most difficult semester at Cornell. I was taking way too many credits, including a computer science course, and beginning my honors thesis. I was just barely holding it all together when my mentor for the thesis--the person with whom I was meeting weekly--died.

He had introduced me to a whole new way of making music, and although we had only known each other for a short time, his death hit me hard. I had the option to go home, take a break and grieve away from campus, but I decided to stay, for better or for worse. I believe I made the right decision, and out of that painful experience, I found a new purpose. Before meeting this person, I wasn't sure what I wanted to do after graduation. My plan involved floundering and stumbling through a gap year or two... or three while trying to get my life figured out. Now, I have a much clearer vision for what I want to do after I leave Cornell. I've rediscovered my passion and found a few new ones along the way. I'll never forget that period of my life, or the impact my mentor had on me, but his memory is what drives me to keep going.

What, if any, Cornell-related scholarships/special financial benefits did you receive?
I received the Cornell Grant all four years, the Knauss Family Scholarship, and the Mellon Mays Undergraduate Fellowship during my junior and senior years.

What accomplishments/activities are you most proud of while at Cornell?
I'd say that being here all four years is an accomplishment in and of itself. Cornell pushes students farther than they've ever had to go before, and while that definitely has its drawbacks, it has made me a much stronger person. Being at Cornell has brought me out of my shell in a major way: I have become much more tenacious in pursuit of my dreams, most of which I didn't even know I had until coming here.

To be more specific, I would say that developing the drive to achieve my dream of being a composer is one of the accomplishments I am most proud of from my time at Cornell. The culmination of that was the completion of my Senior Recital. Planning the recital, writing all the music, and finding ways to show what I learned over the last four years of being a Music major was an enormous undertaking, but coming out onstage and seeing my friends and family in the audience, hearing feedback from other students, and knowing that my music touched someone's life or made their day better made it all worth it.

What, if any, research projects did you participate in at Cornell?
I took on a project about Tolkien as part of the Mellon Mays Undergraduate Fellowship. The crux of this project is an argument for the critical role played by music in Tolkien's cosmology, particularly as it pertains to the opening chapter of The Silmarillion.

In addition to that, I also completed an honors thesis, the presentation of which was part of my senior recital. That was a musical tribute to my grandfather in the form of a piece for double bass and electronics.

What Cornell memory do you treasure the most?
For me, picking a favorite Cornell memory is like picking a favorite color: I don't have one because there are too many to choose from, but for the sake of brevity, I'll pick one: I had a friend who had been studying abroad during my freshman year, so I'd only known her through her online presence. Shortly before she came back to Cornell, she reached out to me and asked to meet with me over lunch. We hit it off and began to have weekly meetings, and she and I became good friends. We would talk for hours about life and school and anything else that came up. She was one of my first really close friends at Cornell, and a lot of my best memories of Cornell involve her in some way.

Who or what influenced your Cornell education the most? How or why?
As amazing as my professors were (and they were top-notch), I learned a surprising amount outside of the classroom. I expected to learn real-world things in that sphere (how to drive, how to pay taxes, how to register to vote, etc.), but being at a large research university with so many young, brilliant, insatiably curious minds has given me an endless array of opportunities to question people about their intellectual pursuits. One of the best decisions I ever made was to ask my graduate student friends about their research; so many Cornellians are doing ground-breaking, cutting-edge research and hearing them talk about the things they've learned has expanded my store of knowledge immeasurably. In short, I would say that my Cornell education was most influenced by my fellow students.

How did any of your beliefs or interests change during your time at Cornell?
I have become much more comfortable with complexity. Over these past four years, I have explored the religious traditions of my family and friends, some more rigid and others less so. I have alternately struggled with them, embraced them, questioned them, rejected them and distanced myself from them at one time or another. This exercise has forced me to ask the big questions--"why are we here?", "what is the meaning of all of this?", etc. The answers I have gleaned have brought up new questions and given me the privilege of viewing the world with all its complexities. After facing so many, I eventually lost my fear of questions, both answered and unanswered. I learned to see multiple sides of a given religious (or irreligious) stance and evaluate it with the knowledge that there are opposing but equally valid viewpoints. I have become much more comfortable with the fact that not everything is black and white, us and them, one or the other. As Obi-Wan Kenobi once said, "only a Sith deals in absolutes."

What do you value about your liberal arts education?
I deeply appreciate the interdisciplinary direction liberal arts is taking. In addition to my arts and humanities classes, I have also taken a few science classes, and those only enhanced my critical thinking skills. Had I not learned computer science via Python, I might not be so quick to detect errors and inconsistencies in an argument, but since I learned to anticipate and spot bugs in my code (and sometimes other people's code), I have become much more adept at thinking logically and finding these problem areas. Were it not for the Phonetics and Phonology course I took freshman spring, I wouldn't be so familiar with speech analysis software, and may have never gained an interest in acoustics, which is directly responsible for the topic of my honors thesis. The amazing thing about receiving a liberal arts education at Cornell is that in spite of the fact that all these courses are across departments and in seemingly disparate disciplines, they are connected both by my curiosity and by my ultimate destination as of the end of my time here.

What are your plans for next year; where do you see yourself in 10 years?
I will spend the next year traveling, interning (fingers crossed!), and applying to graduate schools. I'm interested in programs for film composition, video game music, and computer music. During that time, I would also like to build my own instruments and learn more audio editing software, programming languages for audio synthesis, and hardware platforms for instrument-building and circuit-bending. In addition, I also want to achieve my other dream of becoming a hacker-musician, if that's a thing that exists, which I'm sure it does.

I fully expect that dream to be realized in the next ten years. By that time, I want to have achieved full on Rock Star Hacker-Musician status, preferably in a position that allows me to teach my ways to others that are interested. In all seriousness, I want to teach music to college students. I would like to be cross-listed across different departments in a college or different colleges in a research university like Cornell. My ideal cross-listing would be something like Music and Computer Science--I would be able to perform in faculty concerts and build singing robots during the same academic year, and who wouldn't want to do that? I want to be the professor with the really cool class that everyone wants to take before they graduate. I want to have students that are excited to learn what I have to teach them, and research that makes me happy and drives me to keep learning. 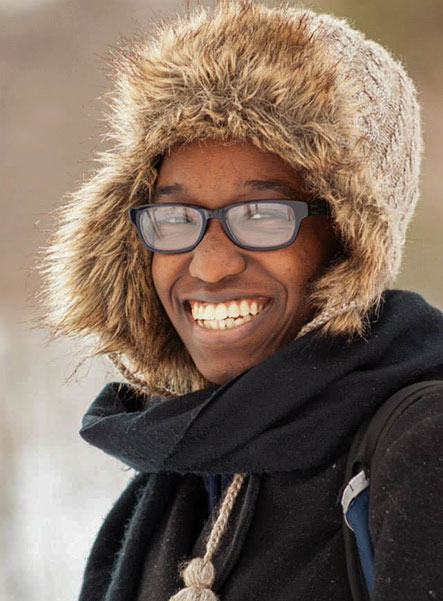