Throughout the Fall 2020 semester, the students and faculty of the music department have shown remarkable resilience and creativity in order to continue their musical activities. The circumstances of the pandemic required innovation and adaptation, but the results allowed students to stay connected with each other and with audiences onscreen. Many of this semester’s projects are still available to view, and links follow in the summary below.

The department’s performing ensembles faced incredible challenges since wind instruments and singers were not able to perform in groups indoors, but the directors developed unique solutions to continue to engage with students and encourage music-making. For the first half of the semester, the Wind Symphony rehearsed and performed with masks and social distancing in a tent on the Arts Quad, resulting in a concert in October. They then transitioned to an online format to continue their relationship with Haitian music. Videos from that series are available to watch online: Live performance from RAM, Rara Rhythms, Rara Horns, Haitian Voudo Rhythms, From Voudo and Rara to Rasin Plus, James Spinazzola interviewed Wynton Marsalis, looking ahead to his first piece for wind band, set to premiere at Cornell in the next academic year.

Senior bassoonist James Parker says that playing in Wind Symphony this semester “meant everything to me. Playing music has always been my primary emotional outlet, and the Wind Symphony has given me my favorite musical memories to date. and since playing the bassoon is so integral to my identity, the fact that I’m able to enjoy it this last year means the world”

The Jazz Combos, under the direction of Paul Merrill, were able to perform with each other utilizing networked classrooms in Lincoln Hall that allowed the students to see and hear each other nearly in real-time, a crucial element that is often not possible in virtual performance. The results of their efforts, including original student compositions, are available as the Jazz Desk series on YouTube.

Adam Kadhim performed in both the Jazz Combos and the Hip Hop Collective this semester and says, “As students we're lucky to have faculty that really went the extra mile to find ways for music to continue in safe ways because it definitely would've been easier to just throw in the towel, but what we have will be a historical testament to the compassion of the faulty of this semester. I think it definitely goes both ways though, too; the faculty are inspired by such a great student body that are constantly pushing boundaries and making Cornell a better place to be."

The Orchestra met online, engaging with a slate of guest speakers who discussed the lack of diversity in the orchestra as an institution. These talks covered a wide range of topics and are available to view at the Orchestra’s website. Orchestra President Sage Lee noted that “getting to hear from these speakers about their thoughts and efforts towards changing this for everyone has given me hope that maybe someday, even the staunchly traditionalist music world can diversify and modernize in social beliefs.”

Though the Orchestra was online, many string players participated in the chamber music program, and were able to meet in person (with masks and distancing) to rehearse and play together. Violinist Isabelle Aboaf says that “chamber music is really different from orchestra - there’s a lot more conversation between players about the way we want to interpret the music. It’s training my listening ear really well, and I’ve been able to form friendships with the other members in my ensemble quickly. I’m so thankful that I have this experience this semester. With so many online classes and Zoom meetings, it’s a breath of fresh air to be able to come together and play music together in a small group."

Private lessons were another way students were able to make music, whether in person with their instructor, or live on Zoom. The violin and voice studios held virtual recitals for the public, and other studios performed just for each other. Two DMA recitals from Thomas Feng and Richard Valitutto were also held, with premieres live on YouTube.

Choral singing was a particularly difficult challenge, but the vocal ensembles took advantage of the nicer weather earlier in the semester to sing together in small consorts outdoors, again, with masks and distancing. They were able to utilize interesting spaces on campus, including the sculpture court of the Johnson Museum and a parking garage. When outdoor singing was impossible, the groups worked on musicianship skills such as sightsinging and created virtual choir videos in which each person records their part separately. They produced a special video for StayHomecoming, and held a one-night-only virtual version of the beloved Readings and Carols that attracted more than 1300 people from around the world.

Wynne Williams-Ceci affirmed that “without a doubt, taking part in music at Cornell (in the Chorus and voice lessons) has enriched my experience as a first-year immensely. Being able to work on music, even though it has been mostly virtual, has given me an area in which all of my hard work feels like it pays off and truly does help me work closer towards my goals in a visible way. Additionally, participating in music at Cornell instantly gave me a warm and accepting community of friends who I am grateful to have as a part of my life and who I know I can reach out to for help or advice at any point that I need it." Likewise, first-year graduate student Clara Valenzuela said “being in the Chamber Singers has greatly improved my Cornell experience! It's been a great way to safely meet new friends and connect with other graduate students. Choir is also a great way to destress, and I can't wait for us to sing together in a "normal" setting some day in the future!"

The Improvisation Ensemble, led by Annie Lewandowski, also met in a parking garage, and wrapped up their semester with a recording of Cornelius Cardew’s The Tiger’s Mind, available to stream on SoundCloud until January 6. Ensemble member Kristi Lim noted that while the new setting in the garage “meant some gentler textures were lost, also more accidental/elemental sounds were present (the dripping of taps, the movement of leaves, and of course sometimes cars drove by). Whenever we were missing a character/player for the piece, some of these would be assigned and interacted with. It's a great space to explore boundaries in an anti-hierarchical/dialogic/listening way. I've been nourished and grounded by it, and it's really sharpened my sensitivity (conceptually and emotionally) to a broader range and meaning of sound.”

Other ensembles, including the Steel Band and Gamelan, were also able to safely meet in person with precautions in place. The Hip Hop Collective met online and will be releasing an EP in January around themes of racial justice.

The composition department stayed busy, hosting an international roster of guest speakers for Composers’ Forum, and presenting two DMA recitals. The Cornell Contemporary Chamber Players collaborated with the Thailand New Music and Arts Symposium, and several performances and panel discussions are available to watch online. Additionally, the composers are workshopping new pieces virtually with the Israeli Chamber Project as part of the Stucky Residency for New Music.

The new circumstances surrounding the pandemic caused DMA composer Miles Friday to ask exploratory questions about composing itself: “Can I still compose and make art without writing scores for performers to present on a stage, in a concert hall? Can the instrument itself be examined as a medium through which art is made? Can I, through composing, think of the microphone and loudspeaker as a musical instrument? And, once that is done, can the microphone and loudspeaker become not just tools but active, independent participants in a sonic field? In exploring questions such as these through project-based work, I’ve tried to develop an understanding of composition as being more than just a medium and being, instead, a flexible methodology.”

The Cornell Center for Historical Keyboards created content throughout the semester, producing two distinct video performance series. Beethoven and Pianos: Off the Beaten Path celebrates the 250th birthday of the composer by taking two complimentary paths: in one direction, exploring lesser-known pianos (and represented in the CCHK collection) that shaped Beethoven’s aural and kinetic memory and that are the focus of cutting-edge research today; in the other, listening to contemporary responses to this monumental historical figure and his music. The Music as Refuge series reflects on how music can be a source of refuge during turbulent times, or is itself a means of escape, in a series of short recitals performed by Cornell’s pianists and organists. Videos are available to watch online, and more content is forthcoming in January.

The ONEcomposer initiative is a commitment to the celebration of musicians whose contributions have been historically erased. It provides a platform for the study, performance, and discussion of a single, underrepresented composer’s life and legacy for the duration of an entire academic year, and this year features Florence Price. The fall semester’s programming included lecture-recitals, live-streamed performances, and a speaker series to engage with Price’s work. More events are forthcoming in the spring, including a digital performance of Price’s First Piano Concerto with the Philadelphia Orchestra and pianist Michelle Cann.

Students in David Yearsley’s music journalism class created Ezra’s Ear, a blog that is available to read online. The Musicology Colloquium also continued in a virtual format with speakers from throughout the United States, and of course, great work was done in the wide variety of classes offered by the department.

Check back for spring events listings in 2021! 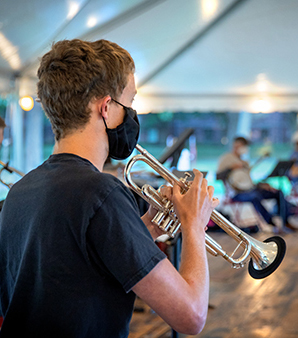