“When you are living in Russia, you always feel [like you are] in the theater … It’s a totally absurd world sometimes,” Masha Alyokhina of Russian feminist protest band Pussy Riot told a full house Nov. 2 in Klarman Hall’s Rhodes*Rawlings Auditorium.

Overflow seating with video projection was quickly arranged in the Klarman Hall atrium because so many people turned out to see the conversation with Pussy Riot, part of the weeklong Punkfest organized by the Departments of Music and Comparative Literature, Cornell University Library and Dan Smalls Presents.

For Alyokhina, the band’s focus is not punk music, but rather the punk way of life that allows one to act abnormal because, she said, “I kind of hate norms.” She first became an activist as a college journalism student, when she learned that the government planned to destroy a forest to build a luxury development. Alyokhina started collecting signatures and posting information on social media, and eight months later about 8,000 people were part of the movement that succeeded in saving the forest.

Alyokhina was joined on stage by Sasha Bogino, journalist for the independent news outlet MediaZona, and Sasha Cheparukhin, a promoter and music producer who was instrumental in freeing Pussy Riot from prison in 2014. They were interviewed by Judith A. Peraino, professor of music and director of the LGBT Studies Program, and Tom McEnaney, professor of comparative literature.

MediaZona was created by Alyokhina and fellow Pussy Riot member Nadya Tolokonnikova after their release from prison. Its small staff of 17 journalists primarily report on violence in the Russian court system, the prison system and against the LGBT community. Independent news organizations may not use the word “suicide,” Bogino noted, so MediaZona reporters jokingly substitute the name of the government media observer for the term.

When the band was in court, Cheparukhin brought letters of support from many Western musicians, including former Beatle Paul McCartney. The audience at Klarman Hall got to see McCartney’s letter while watching an excerpt of a 2016 documentary film, “Act and Punishment,” directed by Evgeny Mitta. During her prison term, Alyokhina brought four criminal cases against prison administration for violent behavior and won three of them.

Alyokhina’s latest project is “Burning Doors,” a play produced by the Belarus Free Theatre. The production draws its title from “Lubyanka’s Burning Door,” a performance art piece by Pyotr Pavlensky, in which he set fire to the front door of Russia’s Federal Security Service building. Alyokhina described the play as “120 minutes of tortures.”

Alyokhina, along with Tolokonnikova and her husband, made the music video “I Can’t Breathe,” about the 2014 death of Eric Garner at the hands of a New York City police officer. They worked with American punk musician Richard Hell to record the video while visiting New York.

When Peraino asked what advice the speakers have for burgeoning student activists, Alyokhina stated: “Everything [comes] from the heart. I’m totally not something unique or special. I’m like everybody … The choice is usually to act or stay aside. Don’t stay aside. Otherwise, your history will be written by somebody else.”

The panel discussion was one component of Punkfest at Cornell to kick off the Nov. 4 opening of “Anarchy in the Archives,” an exhibition of the library’s punk collections.

Amanda Bosworth, a Cornell doctoral student in history, is a writer intern for the Cornell Chronicle.

This article was originally published in the Cornell Chronicle. 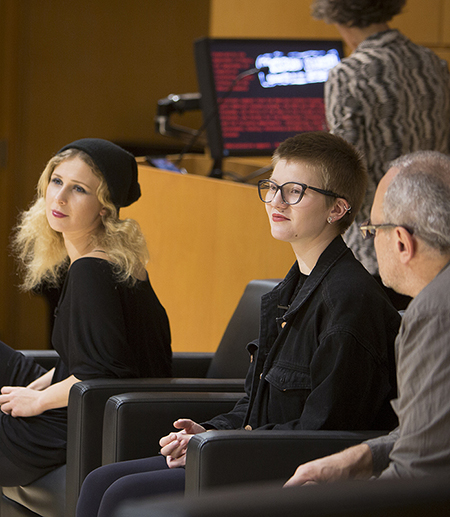