Only one human-touched object has ever entered interstellar space: NASA’s Voyager 1, bearing with it greetings to extraterrestrials in the form of a Golden Record. The university is celebrating the 40th anniversary of Voyagers 1 and 2 and Cornell’s central role in the missions and the Golden Record with a weekend of events that began Thursday, Oct. 19. All events are free, and the public is invited.
“40 Years of Cosmic Discovery: Celebrating the Voyager Missions and Humanity’s Message to Space” began with a panel Oct. 19 in Bailey Hall, introduced by Cornell Provost Michael Kotlikoff, and featuring people who worked on the mission:

One of the handful of Golden Record covers that remain on Earth is featured in a special exhibit at Cornell University Library’s Division of Rare and Manuscript Collections, courtesy of Ann Druyan -- it has never before been on public display. The multi-media exhibit includes images and sounds from the Golden Record, as well as the original book by Isaac Newton that was photographed for the Golden Record and a first-edition, signed copy of Carl Sagan’s “Murmurs of Earth.” A copy of the Voyager Golden Record boxed set, newly issued by Ozma Records and donated by producers Timothy Daly and David Pescovitz, is also on display. The free exhibit opened Oct. 19 and can also be seen Friday, Oct. 20 from 9 am – 5 pm, and Saturday, Oct. 21 from 11 am – 5 pm, on level 2B, Kroch Library.

“Unafraid of the Dark,” the final episode of “Cosmos: A SpaceTime Odyssey” that features the Voyager mission, will screen Oct. 20 at 4:45 p.m. at Cornell Cinema and will be introduced by Andrew Hicks, assistant professor of music. After the film Druyan, producer, director, and co-writer of the episode along with Ozma Records co-founder David Pescovitz and designer Lawrence Azerrad, co-producers of the Golden Record boxed set, will offer reflections and answer questions.

The pioneering NASA Voyagers 1 and 2 were launched in 1977 from Cape Canaveral to explore the solar system. They are the only spacecraft to have visited Uranus and Neptune. The gravitational assist from Jupiter that slingshot the Voyagers on the first reconnaissance of the outer solar system will propel them throughout the Milky Way for the next several billion years. Each Voyager bears a complex message affixed to its side in the form of the Golden Record, a 12-inch gold-covered copper record containing greetings, images of life on Earth, world music and other sounds of this planet. They have a shelf life of 1 billion to 5 billion years.
“40 Years of Cosmic Discovery” is sponsored by the Department of Astronomy, the Cornell Center for Astrophysics and Planetary Science, the College of Arts and Sciences and the Carl Sagan Institute, which conducts an interdisciplinary search for life in the universe. 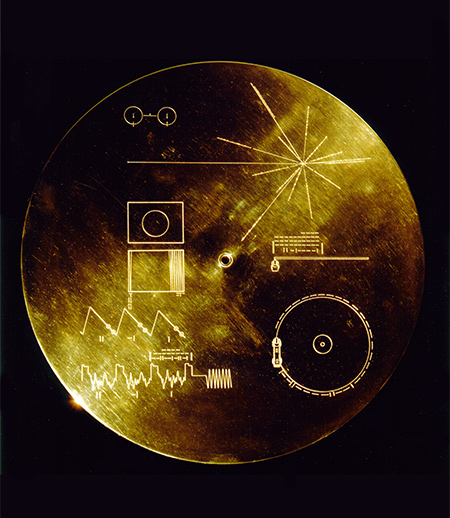