The concert, at 3 p.m. in Bailey Hall, is free and open to the public with no tickets required. Before the concert at 2 p.m., there will be an instrument “petting zoo” in the lower lobby of Bailey Hall sponsored by Hickey’s Music to let concert-goers touch and get to know the instruments that will be used in the concert.

"It is wonderful to be able to welcome the CCO Youth Orchestra to our musical community and join forces to perform together," said Chris Younghoon Kim, director of orchestras at Cornell University and associate professor of music.

Robert Boardman and Kirsten Marshall will guest conduct the concert this weekend. Boardman is music director and conductor of the South Bend Youth Symphony and Marshall is a faculty member in the School of Music at Ithaca College.

Cornell student Thomas Rachman ‘20, has written an overture called Passages that will have its premiere at the concert and Andy Sheng ‘20, winner of the 14th annual Cornell Concerto Competition, will play the first movement of Beethoven’s Piano Concerto No. 4. Other highlights of the concert include selections from Wynton Marsalis’ Blues Symphony and the orchestras joining together on Tchaikovsky’s Symphony No. 2 Finale. 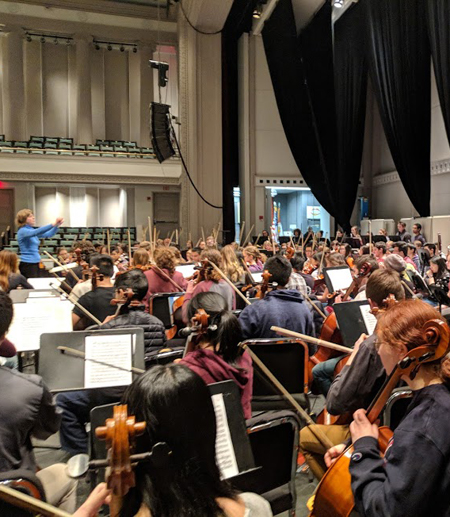