CCA 2016 Biennial to focus on empathy

The Cornell Council for the Arts (CCA) 2016 Biennial, “Abject/Object Empathies,” will feature 12 new projects by invited artists, Cornell faculty members and students. Most of the works will be presented on campus between Sept. 15 and Dec. 22, all on the theme of the cultural production of empathy.

A video projection at various sites across campus will kick off biennial events, and artist-in-residence Pepon Osorio will launch his participation with a public talk Sept. 15 at 5:15 p.m. in Milstein Hall. He joins fellow biennial artists and invited speakers Sept. 16 for a daylong series of “Biennial Conversations,” including an Intergroup Dialogue Project workshop. Visit cca.cornell.edu for a full schedule of events and project locations.

The biennial is designed to bring contemporary artists and Cornell researchers together to produce new works that have a lasting impact for faculty and students.

Osorio’s work is experiential, site-specific and often reflects social and political realities, such as an installation at Temple University where he teaches, addressing the closing of public schools in Philadelphia.

“He draws out embedded social systems,” said CCA Director Stephanie Owens. “He created a transformed classroom and activated the gallery as a site of education for the kids that were closed out.”

Treating objects like artifacts, he develops multimedia installations over time after getting to know a place from the people who know it best and live and work within it. He will develop a site-specific installation for the Arts Quad, opening in April 2017. He considers the final work “the debris” of the process of researching and creating it.

“He subverts artistic style to foreground what needs to be specific to where he is,” Owens said. “I find it very poetic, the way he relates to site and object.” In his project at Cornell, she said, “we will see what he’s observed.”

A multimedia artist with background as a social worker, Osorio accepted an invitation to work with Cornell faculty to understand the university as a representational system and a site of overlapping social realities.

“Empathy is at the core of my practice,” Osorio said on a recent visit. “I think we live in a democracy where we feel we ought to belong everywhere. … I want people to be aware of where they stand in relation to their own community. There’s a stark contrast between the multiple environments that exist at a university and how people inside or outside relate to the university. There are sharp differences of understanding.”

He has engaged with Cornell scholars in psychology, information science and anthropology, among other disciplines, and met with community organizations and leaders as well as young people in Ithaca.

“This is my third visit to Ithaca. I feel comfortable here,” Osorio said. “It is quite obvious it is a place of great access. I’ve been talking to potential collaborators and listening a lot. The discussions translate to metaphors for the work.”

Empathy acknowledges the presence and the struggles of others – and contemporary art, in addressing questions of human empathy, can intersect with multiple fields such as philosophy, neuroscience and biology, Owens said.

“Can we really know the plight of another?” she said. “There’s work being done in neuroscience on the study of the social mind. What parts of our mind are connected to others?”

Student projects include “Hear Me,” an installation at the Herbert F. Johnson Museum of Art by Min Park, B.Arch. ’17. The Building Community’s “Traveling Tool Library” is led by Rand Hall Shops manager Daniel Salomon, with Cameron Neuhoff, B. Arch. ‘16, and Isabella Crowley, B.Arch. ’17.

People will be able to interact with many of the installations and artworks and join in creating and experiencing empathy. Courses related to the biennial, such as Chu’s choreography class using O’Donnell’s “Urchin” as inspiration, or Owens’ advanced digital media class on object empathies, will allow students to explore topics around the theme, in art studios in particular.

This story originally appeared in the Cornelll Chronicle. 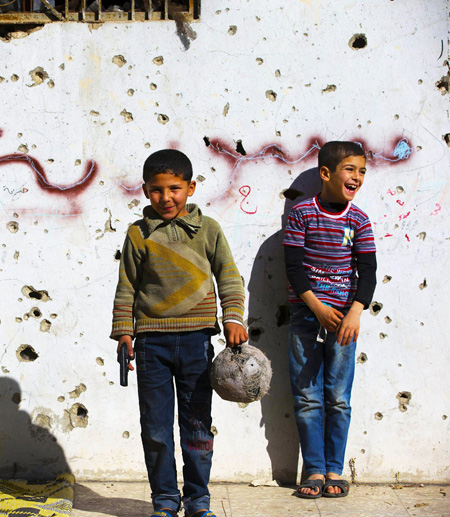