For two days at the end of October, Cornell’s classics department brought antiquity to life in what organizer Verity Platt described as “a blaze of color” in Klarman and Goldwin Smith halls.

“Sustaining the Antique, a 21st-Century Festival of Classics” celebrated the living aspects of Greek and Roman culture, “the many ways in which we examine, imagine, identify with, resist, and think with and through the ancient world,” said Platt, associate professor of classics and history of art.

“What we practice here in classics – and indeed in the humanities more broadly – is a form of cultural preservation that is parallel, in its own way, to the study and preservation of the environment that characterizes approaches to sustainability in the sciences and social sciences,” she said. “Engaging with the past is in many ways a means by which we try to better understand our present culture, so as to ensure the health of our future one.”

The conference title reflects the concerns of the faculty in conserving, expanding and communicating knowledge about the Greeks and Romans through their teaching and research, Platt said.

“Sustaining the Antique” lived up to its billing as a festival and not simply an academic conference, with numerous interactive events, beginning with a Latin reading competition featuring middle school students from the Elizabeth Ann Clune Montessori School of Ithaca and seniors from Ithaca High School (IHS) and Cornell undergraduates. Competition winners for the beginners level were Rose Fitzgerald and Anya Kramer, both from the Montessori School; advanced level winners were Cecilia Yearsley, an IHS senior, and Luby Kyriakidi, a Cornell classics student.

Festivalgoers were also treated to tours of the plaster casts newly installed in Klarman Hall and a hands-on workshop on the restoration of casts with local conservator Kasia Maroney. A dendrochronology and archaeology showcase offered participants the opportunity to handle samples of ancient wood and ceramics, as well as casts of ancient botanical specimens.

But the festival also offered plenty of thought-provoking scholarship. In his talk, for example, classics and philosophy professor Tad Brennan explored misogyny in Plato’s Republic, in which Plato promotes the view that women should participate in philosophy and politics on an equal footing with men. While Brennan noted this opinion was “startling and unprecedented” when Plato made it, he said there is also “ample evidence that Plato thought that women, as a class, are physically, morally and intellectually inferior to men as a class.” Therefore, said Brennan, in his view Plato was a misogynist, albeit “an unusual and nuanced” one.

Brennan discussed the challenge for students of not confusing Plato’s views with the simpler categories they are familiar with, and “not think that because Plato was an advocate for equal participation, he was also a believer in equal ability, or that because he was a misogynist he was insincere in advocating for equal participation.” In discussing Plato’s misogyny, Brennan said he continually reminds his students “the history of philosophy is primarily the history of false ideas, and that its worth lies in seeing the succession of attempts that human beings have made to try to understand their world and their place in it.”

In the “Classical Antiquity and American Politics” panel, Interim President Hunter Rawlings, professor of classics, offered thoughts on the tendency of public figures to quote (or make up quotes by) classical Greek and Latin authors in order to sound authoritative and well-educated – a custom that can lead to tragicomic consequences. Rawlings pointed to one such misquote, “a collision at sea can ruin your whole day,” ascribed to “Thucydides Book IX” – a book that does not exist. The sentiment, which Rawlings said is nothing at all like Thucydides, originated with a student at the Naval War College in 1960 who issued it as a joke in response to his teacher’s Thucydidean obsession. Rawlings pointed out that despite the student’s confession in 1971, the misquote continues to propagate throughout the internet.

The classics festival closed with a performance by Cornell musician Annie Lewandowski. Her staged song cycle, “Bitter Banquet,” was inspired by the plays of Euripides and directed by Samuel Buggeln. The harpsichord and fortepiano, played by music professor David Yearsley, struck a dramatic contrast with the contemporary set, which was lit by projections designed by local artist Benjy Brooke.

A version of this article also appeared in the Cornell Chronicle. 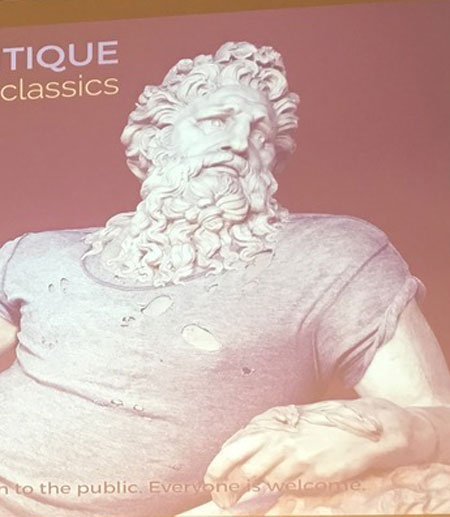