She will reprise the concerto in a March 5 concert on campus. A physics major in the College of Arts and Sciences, she studies cello with John Haines-Eitzen and is co-principal cellist of the Cornell Chamber Orchestra.

Jeong is from Palo Alto, California, and began playing at age 8. A pre-college alumna of the San Francisco Conservatory of Music, her honors include prizes in several national and international competitions and the inaugural Galante Prize as a member of the Chiaroscuro String Quartet. She has appeared twice on NPR’s “From the Top” and has played at Carnegie Hall and various music festivals.

The Cornell competition featured 14 students in the first round, from which four finalists were chosen. The other finalists were Ithaca native and flutist Ellie Bayles ’17, a statistics major and music minor, performing a movement from Lowell Liebermann’s Concerto for Flute and Orchestra, accompanied by Mary Ann Miller; computer science major Jiacong Xu ’17, with Camille Saint-Saens’ Piano Concerto No. 2, accompanied by Yampolsky; and violinist David Zhang ’20, a biological sciences major, with a movement from Max Bruch’s “Scottish Fantasy,” also with Yampolsky.

This article was originally published in the Cornell Chronicle. 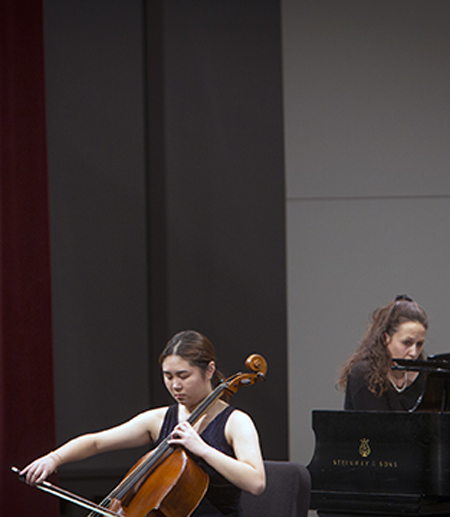