Graduate student Tonia Ko’s career as a young composer and artist has hit a new level, with several recent international honors, concert commissions and performance premieres, including a piece performed on bubble wrap.

Ko, 26, was one of nine recipients of the 63rd annual BMI Student Composer Awards, held May 18 in New York City. The winners ranged in age from 14 to 26.

“It’s something I applied to for many years,” Ko said. Her winning entry, “Blue Skin of the Sea,” was a solo for marimba written for Michael Compitello, director of percussion at Cornell.

Within days of the awards ceremony, two of Ko’s pieces premiered at Cornell during the eighth annual Mayfest, an international chamber music festival hosted by the Department of Music – “Gone Flying” for clarinet, viola, cello and bass; and “Before Color” for the Ithaca Children’s Choir.

And that was just May.

In April, Young Concert Artists named her a 2015-17 composer-in-residence. The residency includes a commission to write a new work for pianist Daniel Lebhardt, to premiere during his recital debuts in the Young Concert Artists Series (YCAS) in New York City and at the Kennedy Center in Washington, D.C., in early 2016, and a second commission for a work to premiere in the 2016-17 YCAS season.

“It was a little overwhelming, getting commissions and awards all at once – I was also studying for my doctoral A-exams, which I passed May 11,” Ko said. “But at the same time – and I always talk to my colleagues about this – being an artist or a musician, you get these periods where you feel like there’s nothing happening. I tend to try to keep blinders on when I’m working and not worry about the outside validations.”

Ko was born in Hong Kong and raised in Honolulu. “Nobody in my family is a musician, which I guess is a bit out of the ordinary for a music student like me,” she said. “I did piano, sang in choir for many years and also had a little stint of playing viola in my high school orchestra. Basically by age 15 I just decided I was going to be a composer.”

She wrote music for a poem that a friend in choir wanted to sing, and “suddenly I was ambitious, so I decided to write a piece for my high school string orchestra,” she said. “I sort of figured out how to do it.”

Encouraged by her orchestra conductor to take composition lessons before college, she studied with a professor at the University of Hawaii before attending Eastman School of Music in Rochester, New York, as an undergraduate and earning a master’s degree at Indiana University. She has studied for a Doctor of Musical Arts in composition at Cornell since 2012 with Steven Stucky and Kevin Ernste, and was assistant conductor of the Cornell Symphony Orchestra 2014-15. Her other honors include a Charles Ives Scholarship in 2013 from the American Academy of Arts and Letters.

“Both Steve Stucky and Professor Ernste have been very supportive in letting me do what I do, and giving me a bit of career guidance as I transition from being a student to being a professional,” Ko said.

“The biggest thing for me coming to Cornell was entering into a very flexible program where I have the space and time to really pursue not only my musical interests but my outside interest in visual arts and bring them together. I also draw and paint, and I discovered that working with bubble wrap is a bridge that links music and visual art.”

She and Compitello conceived of “Breath, Contained,” a piece for bubble wrap and electronics. She applied for a Cornell Council for the Arts grant to present it, and collaborated on a performance with the visiting Sandbox Percussion ensemble.

“We just did a big quintet version in the Sibley Dome back in March,” Ko said. “I was thinking about transparency and musical gestures. It’s very visual.” 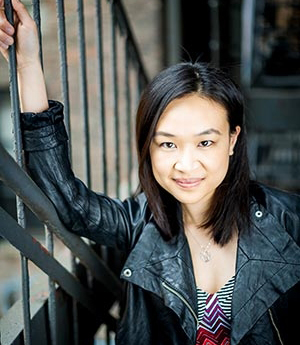