Congratulations, to Dr. Ji Young Kim for receiving the Ph.D. in musicology with an outstanding dissertation, Innere Stimmen and Hidden Duets in the Piano Music of Robert Schumann and Johannes Brahms. Dr. Kim’s study is a signal contribution to our understanding of the complex musical and personal relations within the Schumann-Brahms circle during the 1850s and, more generally, of interpersonal and collaborative aspects of mid-19th-century musical culture. (Its quality is confirmed by her having won the 2018 dissertation-completion fellowship of the American Brahms Society.) It focuses on a complex topic that has never been studied in its own right: 'duetting' textures in solo keyboard music from the middle third of the 19th century. She deals both with 'the music itself', and social and interpersonal aspects of literal and notional duetting at the keyboard, including 'absent' interlocutors, dedicatees, Schumann's notorious innere Stimme, and more.  Her repertory includes fascinating and in some cases little-studied works by Mendelssohn, Robert and Clara Schumann, and Brahms; her treatments of these works constitute a rich study of 'duetting culture' in the mid-19th century.

Dr. Kim's concluding chapter is a detailed study of Brahms' 'Schumann' Variations, Op. 9. She goes well beyond the extensive existing literature, particularly regarding the details of Clara's and Brahms's negotiation of the crisis of Robert's institutionalization in 1854, Clara's reception of the work, and the complex history of two variations that Brahms added later, which harbor the most intense recollections of and allusions to various 'source works' by both Schumanns.

Dr. Kim has been a strong presence in the music department for more than a decade. She is natively trilingual (Korean, Spanish, English) and has excellent German as well. She has taught in a wide range of courses in music history, theory, and performance. She is an excellent pianist, with solo and chamber recitals and lecture-demonstrations to her credit; she makes frequent use of historical 19th-century pianos in Cornell’s collection. She co‑organized a symposium devoted to Robert Schumann’s late chamber music. In 2016–19 she taught at the Jacobs School of Music, University of Indiana, and at the Australian National University, but returned to Ithaca in the fall of 2019; in 2020–21 she coordinated and coached in the Departmental chamber music program. She has served as administrative assistant, print designer, and webmaster for the Westfield Center for Historical Keyboard Studies, housed at Cornell, and the Cornell Center for Historical Keyboards. 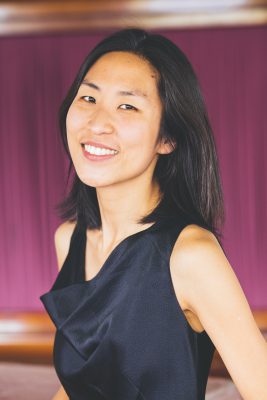