Rebecca Harris-Warrick, known affectionately as Becky by her colleagues, will retire June 30 after a thirty-four-year career in the Department of Music. A noted scholar of dance and dramaturgy in French baroque opera, Becky’s dual passions of scholarship and teaching will be sorely missed in Lincoln Hall.

Becky’s work, centering on critical studies in the role of dance in French opera, has garnered awards, including a Guggenheim Fellowship, and praise. For many years a member of editorial boards dedicated to critical study of the operatic composer Jean-Baptiste Lully and of baroque dance, she has published a number of critical studies and translations of 18th-century operas and ballets. An uncommonly generous and collaborative scholar, her co-authored works place her and her collaborators at the top rank of early dance scholarship. Her 2016 monograph, Dance and Drama in French Baroque Opera: A History (Cambridge University Press) argues that ballet scenes in French opera were far from decorative and marginal diversions from the opera’s narrative, but were integral to it, and that their choreography offers important clues to social status and behavior in the French court of the time.

Equally respected as a scholar and teacher, Becky leaves a legacy of deep engagement with her students, and a reputation as a caring and committed advisor to graduate and undergraduate students alike. She retires this year but will produce a capstone project next year that aptly illustrates her combined passions. Planned for March 27, 2022 in Bailey Hall, her performance project imagines a mash-up by three factions of opera lovers in mid-18th-century Paris, during the so-called “War of the Buffoons”. Using excerpts from three memorable works, it will highlight the aesthetic concerns of the day while giving them a lively airing within a contemporary frame. The performance will feature professional and student singers and dancers, as well as the Cornell Chamber Orchestra and choreography and stage direction by the director of the New York Baroque Dance Company. The project, typically for Becky, is focused on using her research to involve students in multiple ways. The project will be “a capstone to my thirty-four years of teaching at Cornell.”

As generous in life as in scholarship, Becky is widely known to throw out the welcome mat for colleagues, students, alumni, and visiting scholars and performers. She has served the department and college in many ways over the years, including stints as Department Chair and Director of Graduate Studies. Her students and colleagues are grateful for her more than three decades of inspiration, careful thought, and fellowship. 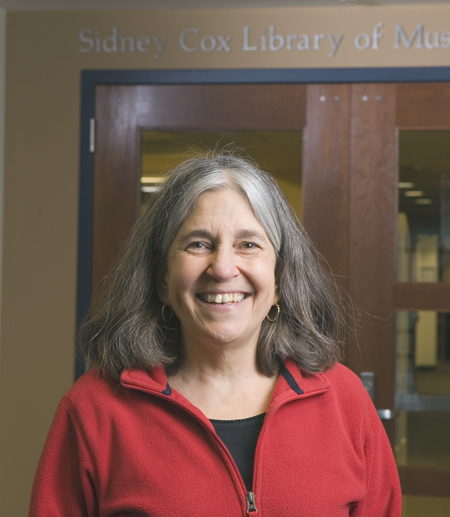